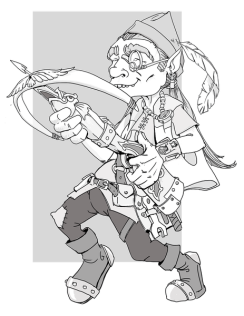 From a young age Gnomes learn to rely on their tinkering skills to make their way in the world. Many forgo walking or using their bodies all together. By the time they reach adulthood many are physically unable to do even the simplest tasks. This is not to say they are disabled, but rather they are enabled via their sharp minds to overcome their physical limitations. As a right of passage, and with a magical steam engine known as a Grizaloop, young gnome construct  mechanized machines, known as Constructs, that enable them to thrive in their world. Gnomes take a life oath to protect their machines and will never share the secrets of the tinker lords.

Construct. All gnome characters begin with a Partial Humanoid construct. The gnome sits inside of the torso and pilots using nobs and levers.

At each level a gnome may choose to upgrade their Construct.

To go with the new V5 Character sheet. Click for the PDF. 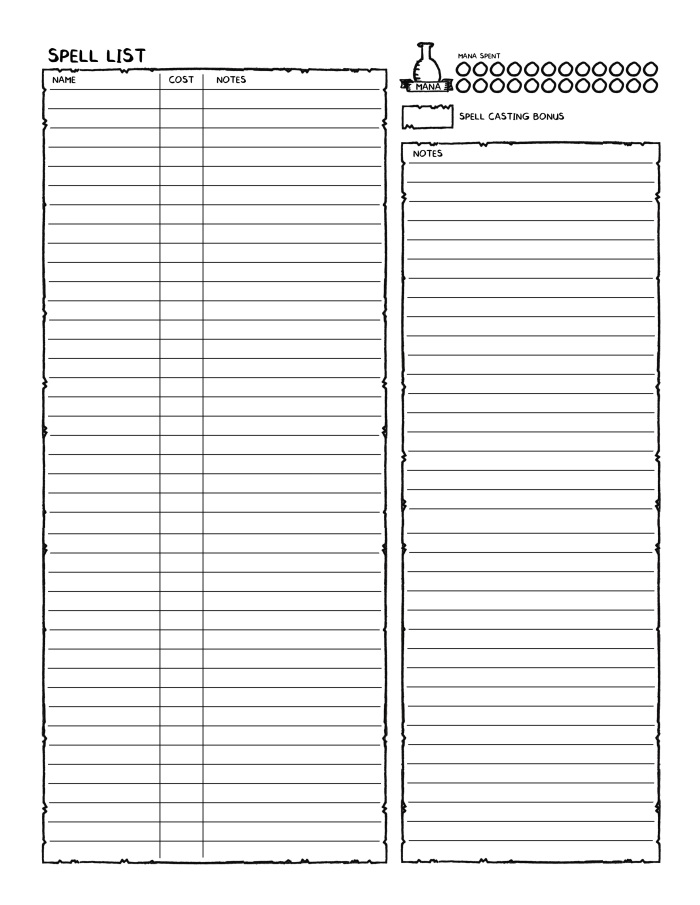 Just messing around with a new layout for the character sheet.

Go play the free Learn as You Play Goblin Raiders with a friend to learn the Easiest version the classic Fantasy RPG ever!

It’s come to my attention that the Druid class was incomplete. I’ve made the following changes:

Sylvan, the language of woodland creatures.

Druid’s mana is their level plus their Wisdom bonus (include ability focus).

Druids draw their power from the very fabric of life itself. Druids call this source Gaia. Unlike other magic classes they can cast any of their spells, but only in the positive. Reverse or evil versions of spells are not available to them.

Thank you to Vatan for bringing this up!

I was reading some really OSR and the concept of Weapon Proficiencies came up. I think this is actually a great limited to add along with the new encumbrance and time limits. Like all rules in SimpleDnD this is an optional rule, but one I cannot recommend enough.

If you ARE NOT proficient with the weapon you are using, you receive a -3 penalty to both hit and damage rolls. NOTE: A negative damage amount is damage applied to the player character. This illustrates that they have accidentally hurt themselves with an unfamiliar weapon.

Each class get’s 1 weapon that they are proficient with.

Cavaliers get 3 and Barbarians 2, this is due to their life long combat interest.

In newer versions of D&D and Pathfinder they each have a skill list. Contrary to popular belief this is not a new idea. Skills go all the way back to the original D&D in the form of Thief skills. I propose that skills are integrated into Simple DnD in a more uniform manner. Skill based characters (Assassin, Grifter, Ranger and Thief) would be completely replaced with the new class, just called Rogue, and allowing the players to customize their characters as they see fit.

Each rogue would choose 6 of the following skills and distribute 24 points between them:

At each level up the player would gain 3 additional points to distribute. New skills can be acquired at the cost of 6 skill points and would start at 1.  With one additional skill added at each 5 levels.

A grifter would know: Contacts, Deceive, Intimidate, Lore, Stealth and Will Power

Let me know your thoughts and ideas in the comments below!

Monks are people who have dedicated their lives to serving the universe. They follow a strict oath of self improvement, seclusion and austerity. A monk must be true to their oath and strive to repay all debts.  They live in monasteries with like minded individuals and adventure to gain spiritual growth and to expand the knowledge of the monastery of the outside worlds.

Ability Requirements: The monk must have at least +2 in both Strength and Dexterity.

Natural Armor: The Monk gains +1 to their AC for each level of advancement. Wearing armor negates this bonus.

Active Defense: In place of one of their next attacks, a monk can use active defense rolling d20 + their Dex vs the attack roll (with modifiers). A successful roll means the monk moves out of the way of the attack.

Multiple Attacks: At every 3rd level the monk gains one additional unarmed attack.

Armor restrictions: Monks can never wear armor of any type, nor can they ever use protective magical devices (such as rings, cloaks, etc.); they rely on their discipline for protection. Wearing armor negates any natural armor or multi-attack bonuses.

Weapon restrictions: Monks can use any weapons, however they lose all bonuses to attack, damage and multiple-attacks when they do.

Oath Bond: If the monk breaks an oath or is expelled from their monastery for any reason they will not gain any new levels of experience until their honor or membership in the monastery is restored.

Monks gain the following special abilities as they progress in experience levels:

Controlled Strike: The monk can control the power of the strike to reduce damage and render a target unconscious rather than killing.

Awareness: +1 to checking if surprised for every 3 levels

Self Healing: Once per day, the monk my heal himself of 1 point of damage for each experience level.

Resistant: Half damage (round down) from all spells, gas or breath weapons.

Fortitude: The monk is immune to charm, command, sleep and hold spells.

Disappear: Once per day the monk can disappear and become completely undetectable for 1 round per level of experience.

Touch of Death: Once per day the monk can cause death upon a successful attack to any creature of lower hit dice than the monk.

Druids share a belief in the fundamentally spiritual nature of life and avoid choosing any one conception of Deity, believing that by its very nature this is unknowable by the mind. All Druids sense Nature as divine or sacred. Every part of nature is sensed as part of the great web of life, with no one creature or aspect of it having supremacy over any other. In doing this they pull their magical powers from the very living world around them.

Restrictions: Druids cannot use any metal weapon or armor

Special: Spell Casting for spells, scroll down for druid spells.

Special: At 4th level Druids can shape shift into the form of an animal once per day. Druid players should pick one animal and that will always be their form. This shifted animal will be roughly the size of the character even if the animal is tiny.

Special: Druids CANNOT read magic. Their power comes from their close connection to the earth.

Much like a cleric, the Druid can repel or befriend animals. When an animal is encountered, the character should roll at d20 and all their Wisdom (and focus) vs a DC of 16 plus the number animals Hit Dice. If the result is equal or greater the animals are turned away or calmed. Magical animals (like owlbears, griffins, etc) add +2 to the DC of the roll. If the roll exceeds the required DC by 5 the animal can be befriended. Calmed animals will not interact with the druid and will calmly move away from the party. Befriended animals on the other hand will follow the druid, guarding and assisting within its capabilities so long as the druid remains in the general vicinity of its normal lair or range.

Each day a magic user character has a magic threshold. We’ll call these mana. Spellcasters gain mana by adding their level plus their ability modifier, Intelligence for Wizards or Wisdom for Clerics.

Spells are already grouped by level, so instead we’ll use the level as the mana cost. So to cast a 2nd level spell would require deducting 2 mana from a character’s mana pool. The spell is NEVER removed from the spell casters memory, and the same spell could be used over and over as long as their is mana in the character’s mana pool.

To recover mana a character must rest. Assuming that a full 10 hours of rest can recover 100% of a character’s mana, then for each hour of rest a character would recover 10% of their total mana.

No spell caster could cast a spell for a cost higher than their level.

The spell caster cannot take any other action in a round when casting a spell.

A spell caster who cannot speak or is bound can not cast a spell.

If the spell caster takes damage before their turn in combat, the spell is interrupted and lost.

The spell caster must be able to see the target the spell is to be cast on.

Spells are just like using a skill. The spell caster must roll d20 plus their modifier (WIS/INT + Level) vs a DC 10 + spell cost/level. If they do not meet or exceed the required number the mana is used, and the spell fails.

Clerics on the other hand have a limited number of spells provided by their gods. Unlike a spell book, their magic is divine and cannot destroyed, but it can be taken from the character if the character does something against their god’s (DM) wishes. In addition, the cleric must have their holy symbol in one hand to cast their spells.

OPTIONAL: It is recommended that the DM limit the spell choices clerics can choose from. The DM has the final say in spell picking for a cleric, and is the limit of choosing a god driven character.

Like a potion of healing, the potion of mana can restore 1d8 mana to a spell caster. Mana can never exceed the maximum value available. These potions are expensive, rare and coveted by magic users. Typical costs are 800gp and up.

A spell caster can choose to use their hit points in the event that they run out of mana. Only after a caster’s mana pool has reached zero may they use their health. 1 hit point = 1 mana. Damage taken to a character this way heals like normal.

What are you thoughts on spell casting systems? Is there a system you love and you think would be better? Post a comment below!

In an effort to differentiate the classes and to add new ones, the magic user classes will have limit spells vs the whole spell list. Here is the spell list for the cleric class.